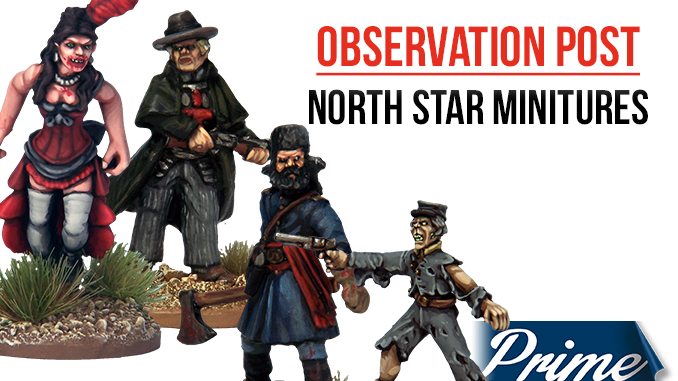 As the latest ‘Nickstarter’ from North Star and Osprey Games continues to be sent out, we managed to get hold of sample figures from across the range.

Here are two miniatures from each of the six main factions for the more supernatural element of the rules system, which cover both the standard Wild and the more Weird West genres.

The main faction in the game is the Red Hand Coven, dominated by President Dracula himself. These are the vampires and their living servants, aiming to slowly take over every part of America. The figures shown are an ancient Broodsire, the leaders of the faction, and a Carpathian Guard, brought over from Europe to defend their undead masters.

Following on from the vampires are the Crossroads Cult, a secret organization of humans with demonic influence. The Cult is aims to create a railway system which leeches power from the ley lines that cross America and summon the creatures of the Abyss. Here we have an Arcanist Magister, summoning such creatures as the demonic Harbinger alongside him.

Next up is a figure from the Skinwalker Tribes, the Native Americans who make use of their unique magic to resist others. They make use of shapeshifting Skinwalkers, able to shift into Werebears and similar. Alongside the Arcanist Shamen is a Sasquatch, not really allied with any Faction but a part of the Bestiary for use in encounters.

The Congregation is a group of former slaves and their allies who occupy parts of the South and wage an ongoing war against the remnants of the Confederacy. They use Vodou magic granted to them from the Loa spirits. Here we have a Vessel for that magic, empowered to vanquish the Congregation’s enemies. We also have a thing from the swamp, a Swamp Baka which houses a summoned spirit to aid the members of this Faction.

The Dark Confederacy is next, the last remnants of the former Confederate State who have been forced into the swamps and dark places of this shattered land. They make use of dark powers to raise the dead to fight alongside Confederate diehards and restless spirits. Here we have a Master Necromancer, one of the leaders of the Faction, along with one of his Revenants, a deceased soldier forced into action once more as an undead creature.

Lastly, we have the Twilight Order, brave servants of the light, who have journeyed from Europe and set up shop in America to take on their ancient enemy, the foul Dracula. They are the Templar Orders of old, battling against the darkness that would sweep across the land, using whatever methods they need to. On the one hand, we have a female member of the Faction clad in the traditional armour of the Order and using the classic weapons of the past. The other is a Crusader, armed with a lever action rifle and protected by a breastplate which shows his allegiance.