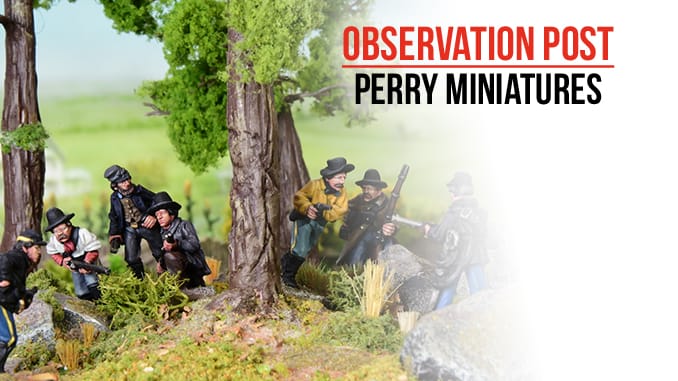 Perry Miniatures often have an eclectic release schedule, moving between new and existing ranges to add something special to their catalogue of excellence. This time, they have added dismounted Confederate Cavalry to their American Civil War codes.

These cavalry fill in the gaps for the dismounted versions of the mounted cavalry already available. During the early war period, many Confederate cavalry took to the field of battle wearing civilian clothing or parts of civilian clothing, often due to the lack of uniforms or as a desire to blend into the local population if working as Bushwhackers or guerrillas.

It’s possible to mix these figures in shirtsleeves with normal confederate cavalry, to provide a more ‘irregular’ aspect to your units. The mix of weaponry includes carbines, shotguns, muskets and pistols, adding to the sense that these are men who’ve headed out to defend their homes with whatever they can find.

Included in the release are dismounted cavalry command in shirts, plus figures skirmishing with various weapons in shirts or heavier civilian clothing. Lastly, there is a Confederate horse holder in a shirt and three horses, allowing the previously released mounted figures to be deployed on foot.

These are now available on the Perry Miniatures website, and compliment those already out.