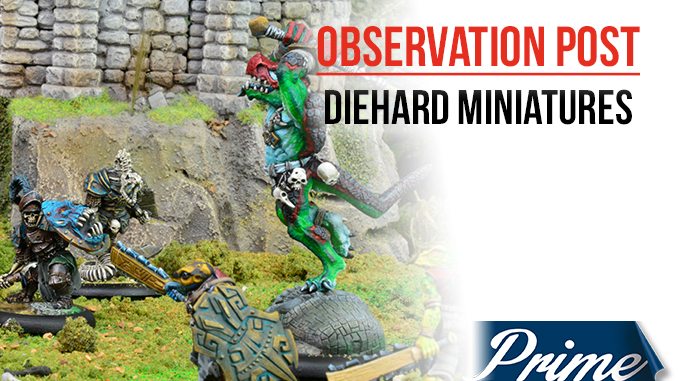 Diehard Miniatures is a small company fronted by Tim Prow, sculptor extraordinaire. Having run two successful Kickstarters, Tim and his associates have managed to create a range of miniatures that straddle the fantasy and sci-fi genres.

The range so far includes some aspects of what has become known as ‘Oldhammer’, taking the aesthetics of now defunct lines of miniatures and presenting them in new, interesting ways. A good example are the Eru-Kin, who have their origin in the Slann once produced by Games Workshop but then abandoned as a concept. These new sculpts of the classic ‘frogs in space’ have a really good vibe and are excellently sculpted.

Snakemen, Necromancers, Warriors, Trolls, all the fantasy tropes may be found in the range, but a nice twist is the inclusion of sci-fi miniatures as well. Again, these have a slightly retro Rogue Trader-era appearance but with some modern sculpting methods, resulting in top quality miniatures with a nostalgic appeal.

Both aspects of the range are united within a gaming framework created by the company, a planet were the fantastical nestles uneasily with future technology. Future plans include expanding the range to include Undead for use within this environment or any other, with classic skeletal undead for the fantasy element and space suit clad versions for the sci-fi one. This expansion will be funded with another Kickstarter campaign in October but, in the meantime, all the current miniatures are available via the Diehard Miniatures website.

With top sculptors like Tim Prow, Chaz Elliott and Drew Williams, this is a range to savour for those who like the retro feel or are looking for something different. There is also the opportunity to create a new force for skirmish gaming or adding something different to what you already have. We hope to feature more on the company and their miniatures in a future issue of the magazine