28mm Defenders of the Reich 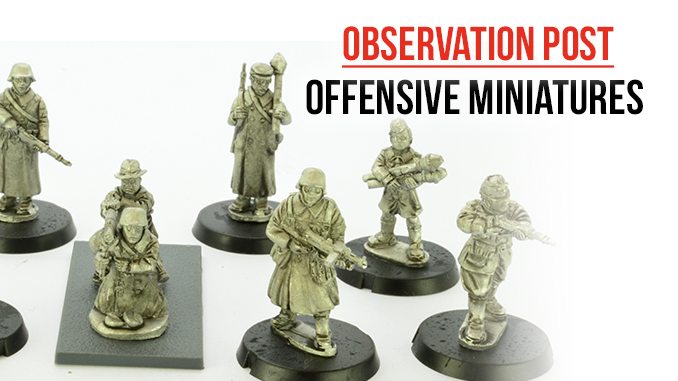 Offensive Miniatures have expanded their range of World War Two figures to include these Defenders of the Reich, those called upon to defend Berlin and possibly other German towns and cities towards the end of the war.

The samples sent for review are from the Volksturm 1 and 3 packs. Most of the figures are in a mixture of civilian and military clothing, although one of the figures is wearing a German police uniform. They are armed with a whole variety of weaponry, ranging from the Panzerschreck and Panzerfaust anti-tank rocket launchers to a captured Lewis gun and what appears to be a variant of the World War One era MP 18 sub machine gun.

These are very poignant miniatures with plenty of character. My two favourites are the old soldier in flat cap and overcoat, with a one shot Panzerfaust over his left shoulder and a rifle slung over the other and the very young looking member of the Hitler Youth in shorts and sidecap clutching two Panzerfausts like a strange version of a golf caddy.

There are a total of five packs in this initial release, all with a varied level of character and poses but with some great details. The sacrifice of ‘old men and boys’ towards the end of World War Two may have been largely futile but these are great miniatures which serve to remind us of the true cost of ‘total war’.