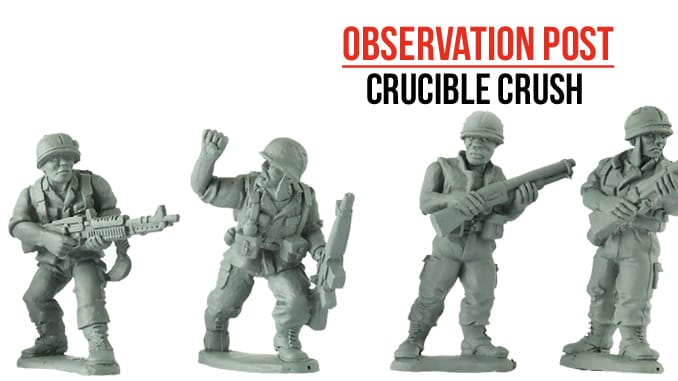 Crucible Crush and Bob Murch have added more packs to their Cthulhu inspired Black Sun range. However, our two packs for review are also suitable for a more historical setting, with one from the US forces and the other representing the Vietcong.

The US Army pack is entitled U.S. Army Squad Specials. This consists of 5 miniatures, each a ‘specialist’. We have an RTO operator with his radio, a command or scout figure giving a hand sign, a figure standing with an M79 grenade launcher, a figure leaning back to cope with the recoil of firing an M60 light machine gun and a figure clad in flak jacket and wielding a Remington pump action shotgun.

The second pack is entitled Vietcong 3. Again, this consists of 5 miniatures, all armed with various small arms. Dressed in the typical ‘pyjamas’ worn by the peasants in Vietnam, they also wear a blend of military and non-military items, from Maoist style caps, military helmets, boots, sandals, knapsacks and magazine carrying equipment.  Weapons include AK47 copies, French MAT 49 SMG and Chinese made SKS carbines.

These figures have all the ‘pulp-ness’ associated with Bob Murch’s excellent sculpting style, but also have plenty of character. They would fit with the larger Gringo 40’s or Assault Group Vietnam era figures, and appear remarkably accurate in terms of kit and weaponry.