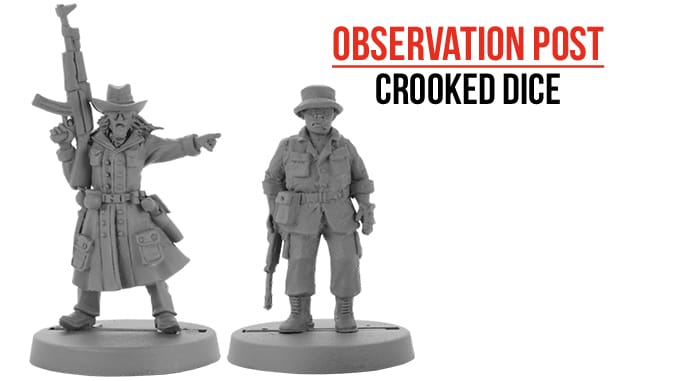 Crooked Dice have an ever-increasing range of miniatures to compliment the various games systems they produce. Between the boxed games 7TV: ‘Spy-Fi’, 7TV: Apocalypse and the upcoming 7TV: Pulp, the company already covers a host of genres and sub-genres, with no doubt more to come. The figures received for review are equally eclectic, with a pack of Wasteland Wanderers and two packs of Governor General’s Army.

The Wasteland Wanderers pack contains four different figures. We have a hooded youth sitting cross-legged with a laptop, a jump suited female partially kneeling firing a large calibre sniper’s rifle, a character in a Rastafarian style hat toting a minigun and a figure in cowboy hat and overcoat holding an AK47. All four figures are crying out for a ‘backstory’ and are full of individual character.

In contrast, the Governor General’s Army packs are much more generic in nature, although they still retain that ‘character’ found in all the releases from the company. These are figures wearing military uniform items and armed with FN-FAL rifles, with one figure carrying a SAW LMG. They are designed to represent an armed militia or similar, perhaps from a relatively lawless region of a modern or Post Apocalyptic nation. They have a look of arrogance about them and could well be considered to have undertaken some dubious activities.

These figures fit into the extremely characterful Crooked Dice ‘milieu’ very well, and would have an appeal to a variety of gamers. Whether you like cult TV and movies or not, the range on offer is full of gems for gamers and role players alike.