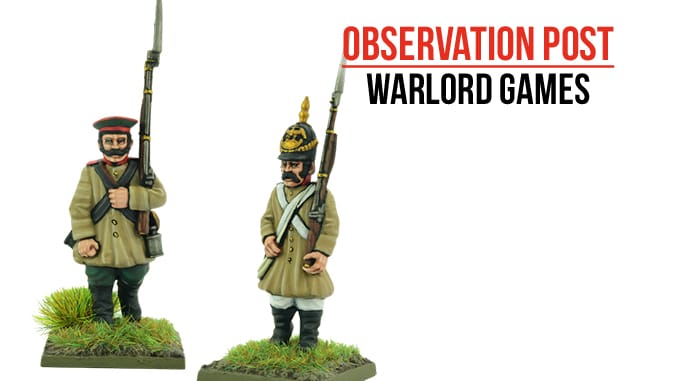 Warlord Games are adding Crimean War Russian Infantry to their 19th Century Black Powder miniatures range. What makes these particular miniatures different is the fact that they are plastic, posed in the now standard fashion adopted by the company.

Each frame of plastic figures allows the gamer to field 6 figures in total. Each figure is depicted marching, with greatcoat either worn straight, rolled or turned back. All the figures wear the standard equipment of the time.

There are 8 heads on the frame, 6 in the high domed spiked helmet and two in the forage cap. This is the only assembly choice for the gamer and provides some flexibility in the inevitable ‘ranks’ that are required.

As someone who has an army of Crimean War Russians, with figures from Foundry and Great War Miniatures, I am happy with what I have. However, I wish I had waited a few more years and had access to these plastics, as they are exactly what the average gamer needs to build up a substantial force remarkably quickly. The decision to have them wearing greatcoats makes painting them all the easier (find a grey spray paint you like, spray, paint flesh and helmet / hat, white equipment, black boots, dip or paint on a wash, base, done!).

These are nicely sculpted miniatures. What may make them even nicer is the fact a single frame of six figures will feature as a cover mount in a future issue of the magazine. No doubt a number of such frames will also feature in a sensibly priced boxed set from Warlord as well. Perhaps its time to move your Napoleonic Era tactics forward in time and create a force for the Crimea, especially as Warlord also have a boxed set of metal British troops as well.