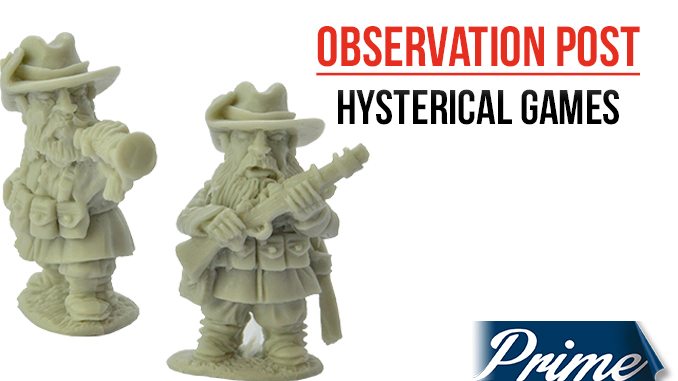 Hysterical Games appeared on the wargames scene with a plan to re-vamp the decidedly different Panzerfauste range, first marketed in the 1990s by Wessex Games. As a ‘historo-fantasy’ set of rules and miniatures range based upon World War Two, they once more unleashed Germanic Dwarves and British Orcs upon the world. Yet, there were other ranges produced by Wessex Games, charting the history of these fantasy races as they progressed beyond swords and shields. So, here’s a sneak peek at a new but old range of miniatures, re-created in crisp resin rather than pewter.

Just like our own history, the denizens of this world went through a number of technological advances and socio-political changes. At one stage, they hit the equivalent of the 19th Century and attempted to build Empires amongst the less known parts of the world.

Which brings us to our miniatures, Dwarves dressed in the uniforms of the German Schutztruppen, with their pinned up slouch hats and tropical cut clothing. They’re ready to forge ahead against the local tribesmen, carving out new territory or fighting to protect the local colonists. They wield bolt action rifles, allowing them to lay down a high volume of fire.

Most of the figures come with separate heads and hands holding rifles, allowing for some poseability, but the main body and arms are one piece. This would enable the figures to be assembled quite rapidly. The figures also have some deep undercuts and clearly defined details, suggesting that a basic paintjob and a wash of thinned paint or similar could soon see them in action on the tabletop.

These are just one of the races that exist within the mind of Steve Blease and Rob Alderman, the powerhouse behind the core concept. As a new take on the world that exists on paper and in their peculiar minds, we look forward to seeing more in this range and hope that the future includes extra large pith helmets, redcoats, diminutive tribesmen and much more.