28mm Citizens of a Far Out Dimension 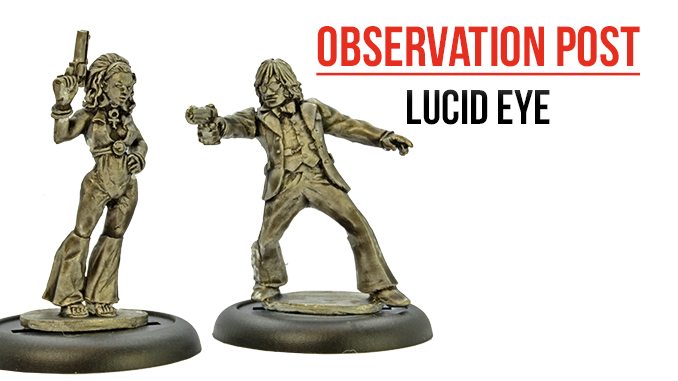 Lucid Eye Publications have followed the successful launch of their Savage Core rulebook and miniatures with a new focus, entitled The Plot Device. These are characters which exist in a slightly psychedelic world of sculptor Steve Saleh’s own creation.

The first pack we have is a pair of Psychedelic Superspies, Titus Verne and his sister Julia. Verne has a separate arm holding a suitably large calibre handgun. Both miniatures have a late 1960’s / early ‘70s aesthetic. Titus Verne is posed taking careful aim, clad in a three-piece suit and sunglasses, with a suitably funky hair style. He oozes cool. Julia poses with a revolver, wearing an outfit that is both salacious and practical when adventuring across the Multiverse. Groovy!

The second pack is a single miniature with a a strange name but one over-arching title, Alien Infiltrator. Bearing a similarity to a music legend, he wears a trenchcoat over a bare chest and jeans, with shades to protect his alien eyes and sports the type of hairstyle that epitomizes shabby chic. He carries a slightly retro-classic raygun to dispose of his targets.

The next character in the current range is a rather Dapper Monkey, clad in semi-Victorian garb complete with feathered top hat and cane. This is an unusual subject for a miniature but that very fact makes it even more interesting. There’s a sense of a haughty individual here, a simian of substance as he leans on his cane and surveys the world.

The final character is Clinton Shroud, a retro-futuristic gunfighter who comes with a separate piece which allows for the short coat to be extended into a duster or similar. This figure would make an equally good addition to a Weird West posse or a futuristic gang. His pose suggests he is ready to draw, although his military style flap holster could slow him down. However, this does leave the question of the weapon type open for the gamer, meaning the miniature could fit a number of backgrounds.

These are the first four in a range that is going to be expanded, with re-sculpts of previously available miniatures to bring them into line with the range and Factory Girls and Teens coming soon, plus there will be a new bowler hatted fellow in September. Meantime, the Savage Core range will be expanded with six new Bosses. Lucid Eye Publications is a newly launched small company, fronted by a father and son team, but one with big plans for the future and a funktastic style all of its own inspired by top sculptor Steve Saleh.