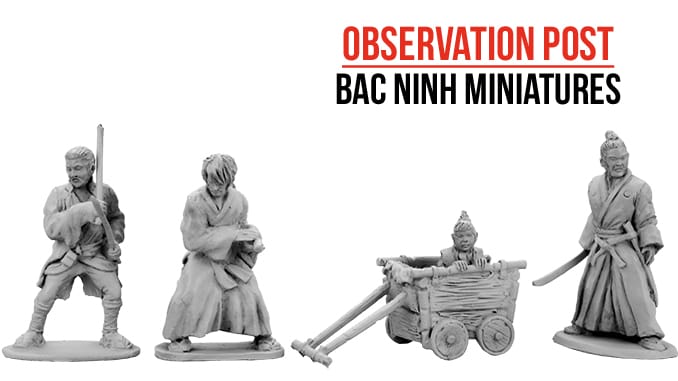 Bac Ninh Miniatures has added a new range based upon famous cinematic and manga-based samurai characters. The figures are all 28mm sized, and will please anyone who likes their heroes with razor sharp slashing swords.

The first figure is SC-02 ‘Tatoichi’, the blind swordsman. Holding a short-bladed sword in each hand, this figure is ready for action, able to use his other senses to defend and attack as required.  Whether a TV or movie hero, attack him if you dare!

Pack SC-03 is entitled Lone ‘Dog’ and Cub, based upon an important and famous manga, which was adapted for Western comic books. The story was also made into six movies, a TV show and even a stage play. With his extra-long sword held aloft, the swordsman is ready to defend himself and his young son, with the latter watching from his all-terrain pram – perhaps an early version of a certain Mandalorian?

SC-04 ‘Yojiro’ looks like a bodyguard who knows his stuff, ready to work for whomever hires him, for a few yen more. This is a classic pose seen across a number of samurai movies, the warrior standing ready to take on all comers.

Lastly, we have SC-01 Ronin Kenshin a master Swordsman who wanders masterless through a violent and danger-filled world. His pose shows he is ready to defend himself against those who have yet to realise just how good he really is.