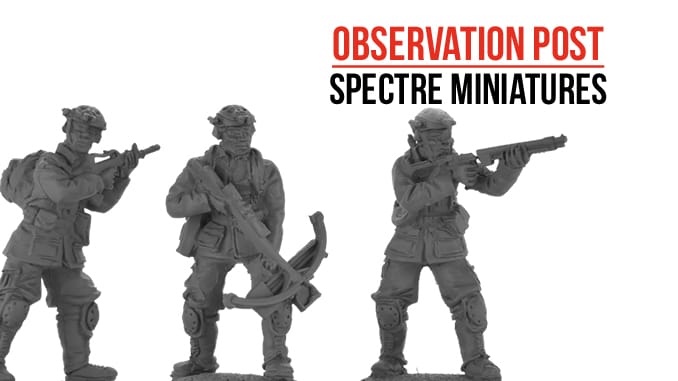 Spectre Miniatures have added a pack of figures intended to represent a Chinese Special Forces Jungle Squad. They have a mixture of standard and specialised weapons for jungle combat, as dictated by the Chinese way of waging warfare.

The riflemen in the six-man squad carry standard-issue Chinese bullpup QBZ95 assault rifles.  One grenadier carries a copy of a US M79 ‘blooper’, that can be loaded with smoke, high explosive, buckshot and flechette rounds. Squad specialists include one man carrying a Type 74 flamethrower, designed to aid in clearing trenches, caves and bunkers and one man with a hunting crossbow for quiet killing.

They wear lightweight vented bump helmets to keep cool and jungle clothing.  They have spare ammo, grenades, communications and survival gear in belt rigs and small backpacks for easy movement through foliage. Despite being a ‘jungle squad’, this loadout would be an extremely effective setup for any CQB environment, particularly urban terrain

These figures are up to the usual high standards we’ve come to expect from Spectre, who operate at the ‘cutting edge’ of Ultramodern miniatures.