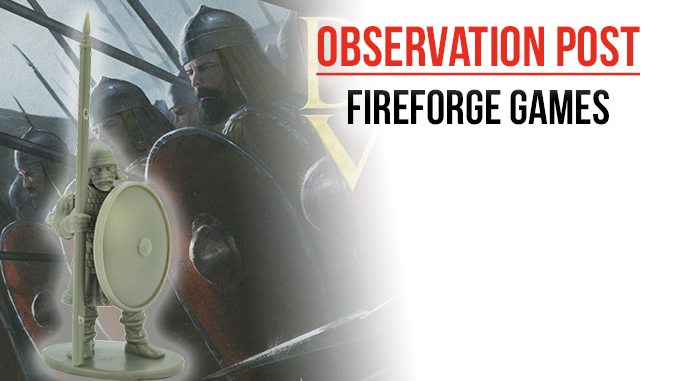 Fireforge Games continue to release plastic miniatures that help to bulk out your armies. This time around, they’ve produced some Byzantine Spearmen.

The Byzantine Empire of the 9th to the 11th Century was pretty much the direct heir to that of the fallen Roman one, with many of the people being direct descendants. The spearmen or Skoutatoi were tough warriors who fought shoulder to shoulder in the Legionary style, using their spears to create a hedgerow of spear points.

There are enough parts in the box to produce 25 figures, with a choice of round or more ‘kit-shaped’ shields. Each frame consists of five bodies, in either chain link or scale armour, with a choice of eight heads and arms with spears moulded into the hands. There is also the option to add scabbarded swords and two arms holding swords, enabling the creation of a command figure or two.

The parts may be assembled very easily and only need minimal cleanup. They need to be fixed with plastic glue or similar adhesive but the fit to one another is very good, just needing some thought on positioning at times. They are designed to be used in ranks on the tabletop, so overly extravagant posing isn’t recommended.

These figures are of the usual quality that is associated with Fireforge and are a great way to add core troops to your Byzantine forces without breaking the bank.