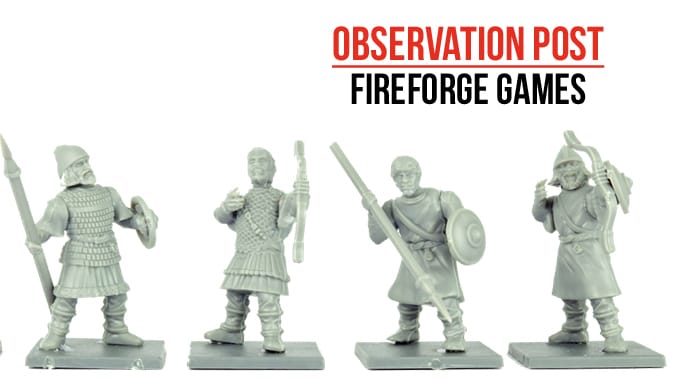 Fireforge Games continue to release miniatures to support their Historical ranges. One of their most recent releases has been a box of multipose plastic Byzantine Auxiliaries.

The 5 identical frames supplied in the box enable you to build 25 Byzantine Auxiliaries. There are enough parts to assemble 10 armoured archers and up to 5 Slingers, plus either 10 light archers or up to 10 figures armed with the javelin and buckler. There are choices of heads, quivers of arrows and scabbarded swords which may be added to create variety. There are also numerous posing options, although these require some thought to avoid the ‘impossible poses’ sometimes seen on the tabletop.

The figures are supplied unpainted and require assembly, which is relatively simple and only hampered by the choices of weapon type on offer. The detail on the sculpts is clean, suitable for careful painting using the layer technique or washes.

The box also contains individual plastic bases for the figures, 25 in total, with a 20mm x 20mm square style.

The figures assemble easily and there are enough of them to rapidly build up a unit, the basic idea behind plastic miniatures of this type. The level of detail is good, and appears accurate for the time period. Another high quality set of miniatures from a company who has blossomed in recent years to be one of the main purveyors of plastic figures for some different aspects of historical and fantasy subjects.