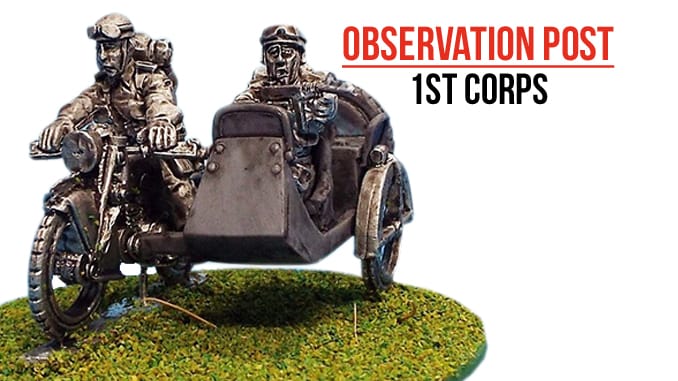 Pack (A) has a rider and passenger armed with a rifle. Both wear British military uniform of the 1930s, complete with the distinctive motorcycle helmets used at the time. Pack (B) has a similar pair of riders, although this time the sidecar passenger has a Thompson sub machine gun.

These are resin and metal models. The sidecar is in resin, whilst the motorbike, crew and sidecar wheel are cast in metal. Some assembly is required, but these are simple kits to build.

The level of sculpting on the figures and bikes is of a high standard, and the subject is pretty unique. These would look good as part of any British-themed force, whether designed for the BEF in 1940 or as part of a Very British Civil War faction. Mark Fuller of Tin Shed Gamer fame has a real knack for producing unique figures that could fit into a host of genres and its good to see that 1st Corps supports his output.