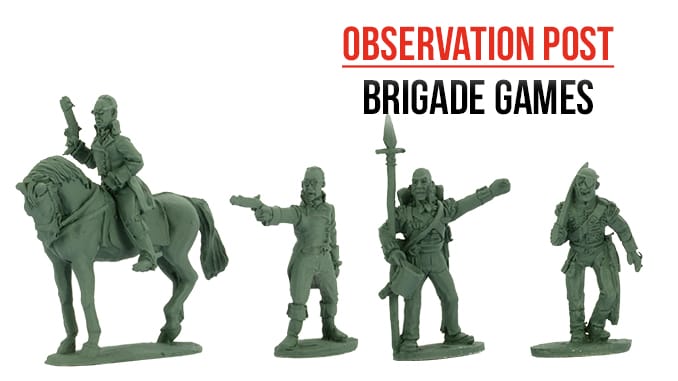 Brigade Games really do have a host of different miniatures ranges, and within each one are multiple codes. One of the most interesting recently has been the figures for the Napoleonic Era, especially for those with an eye to the cinematic.

The sharp(e) eyed amongst you may recognize some of these characters. First of all, we have a dismounted and mounted version of a French spymaster, armed with a flintlock pistol and looking suitably committed to bringing misfortune to those who oppose him.

The next miniature is a British infantry sergeant, with a questionable pike (he shouldn’t have it, surely?), an evil look and a tendency to have a chat with ‘is ‘at.\

Lastly, we have one sweet character, a disfigured Rifles officer with eyepatch and sabre, ready to lead his dirt encrusted men into action with their always clean Bakers.

Between these and the similar miniatures in the range, the gamer has access to most of the characters they’ve always wanted. Plus, even the most basic infantryman in the more recent releases has a level of characterization that other similar miniatures sometimes lack. These miniatures would scale nicely with the Perry releases and offer any opportunity for those looking to add a fictional element to their more historical forces.