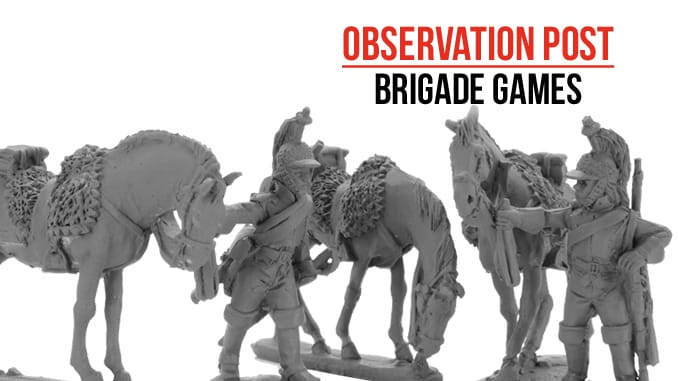 The first two packs represent mounted and dismounted character packs that represent two incarnations of an ‘Exploring Officer’. One has a touch of the Irish rogue about him, a hirsute gentlemen, perhaps partial to a pinch of snuff, equally at home at HQ or out in the field spying on the French during the Peninsular War. The other is much more of a Englishmen, in full uniform officer’s but wearing a wide brimmed sun hat to protect from the harsh Iberian summer. Both packs have horse and foot versions of the characters and a penchant for getting those seconded to them into trouble with the French.

The other pack consists of three horses and two French Dragoons, designed to represent horse holders whilst their fellows probe forward against the enemy or engage them with their muskets. The uniforms and equipment look spot on, as one would expect from top sculptor Paul Hicks.

The Napoleonic range from Brigade Games continues to not only grow but do so with a great deal of style. Keep a sharp-e lookout for more to come in this characterful range in the future, a range which embraces both the factual and fictional world of Napoleonic adventure.