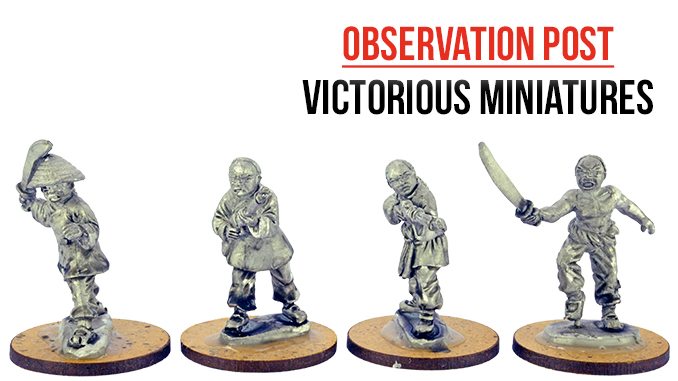 The new figures are for the Boxer rebellion 1898-1901, but could be used for much wider periods of conflict. They are suitable for the Taiping Rebellion, Sino-Japanese War, on into the Chinese Civil War and as bandits.

The swordsmen are possibly the most generic, with traditional clothing and weaponry. The riflemen are armed with fairly ‘modern’ weapons, stretching down through the early 20th Century as opposed to earlier. The poses on offer are suitably active, with even the firing poses being of a realistic standard.

The Tiger Cannon is typical of the decoration found on many types of Chinese artillery. The ‘mouth’ of the tiger motif spits shot at the enemy. This is a well-sculpted piece, with carriage, metal fittings and barrel being nicely rendered. There is some assembly required but the parts fit together very easily. Each cannon also comes with pieces of essential equipment, with barrels of powder, shot a sponge and other items. The gun comes without a crew, although these are available in the range, allowing you to pick from Imperial, Manchu and Boxer crews.

This range is continuing to grow, as is the company itself. The overall quality of the sculpts is high, with evidence of a suitable level of research into the topic. There are plans to add more Chinese and, eventually, the various nations who sought to dominate China.