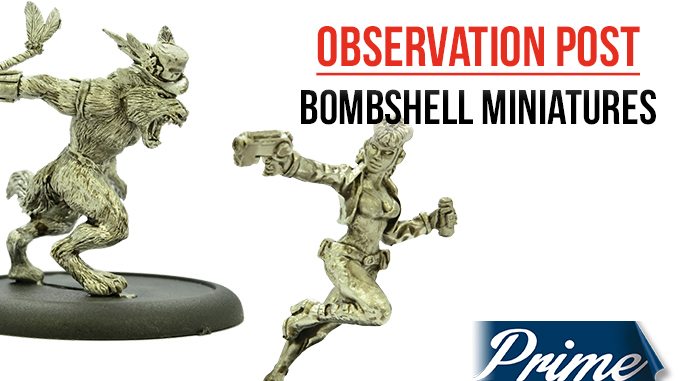 The Bombshell Miniatures range of figures consists of a series of individual characters over a number of ranges. We were sent a selection from the Babes and Counterblast ranges by the official European distributor, West Wind Productions Ltd. here in the U.K.

The Babes range consists of a whole variety of figures from a swathe of genres. You have miniatures inspired by film and television, Steampunk and Pulp, across a number of eras. The twist is that every figure is a female, full of character and appropriately attired for a particular genre. Each miniature comes with a suitable display base, with most being a single or double figure pack.

The Counterblast range is firmly placed within the sci-fi genre and encompasses both male and female characters. A particularly useful feature is the fact that these include both human and alien characters, plus robots, which can be used as characters for skirmish level games. The range is due to be expanded fairly soon, after a successful Kickstarter campaign allowed for the creation of a second edition of the Counterblast rules system.

As you can see, the level of sculpting on these miniatures is of a high standard. In addition, the overall variety of figures ensures that there is something for everyone across the two ranges mentioned, plus there are other items that can be found from the same company. If you are looking for some Pulp-tastic figures for both modern, retro sci-fi and classic era edge, it may well be an idea to check out the relevant website.