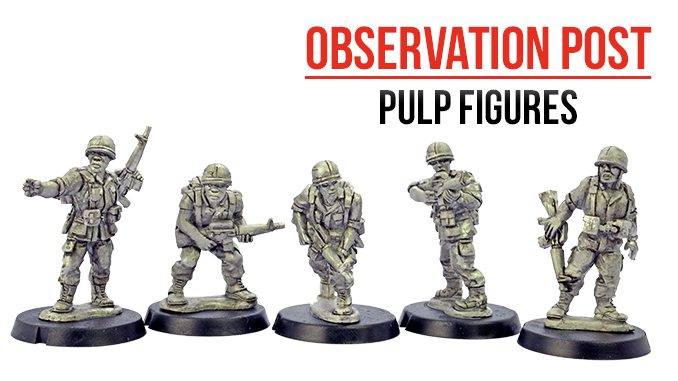 Bob Murch of Pulp Figures is one of the best sculptors when it comes to the ‘classic’ pulp era of the 1920’s to the 1950’s. However, his latest range explores new ground, moving into an era of change and tribulation and adding a whole new aspect to the late 1960’s.

In his own words:

Last reel of Apocalypse Now meets the TV show Lost. Throw in some concepts from quantum physics a la Brian Greene and a good dash of surrealism (Werner Herzog’s Fitzcarraldo) and we are getting close to the idea.

The range is set in 1969 and begins in a lost Cambodian ruined city, built on the ruins of an infinitely older Lemurian city. U.S. forces trying to cut the Ho Chi Minh trail find themselves lead to this city where the Vietcong had situated a massive supply dump. However, the VC had mysteriously disappeared. It turns out there is a multiverse portal where modern intruders are side stepped into the dimension next door, a dimension that on the surface appears the same as our world but is not. (See Lost). Modern Earth is left far behind.

Here they met others who have come before. The Nazi Thule Society made the trip 30 years before and now, led by a Commandant (played by Peter Cushing), they have a Lizard Man army armed heavily with German equipment. There is also a ferocious tribe of sub-human cannibals from 50,000 years in Earth’s past, some equipped with modern Chinese weapons. Throw in bizarre examples of flora and fauna, the still active Vietcong, and physics that do not line up with the physics of our reality, and you have the core idea.

The goal of the game, besides battling the baddies, would be to get back home…

The miniatures released so far consist of US Army and Vietcong from the Vietnam War era. These are figures in the Pulp style, depicted with the correct uniforms and equipment and heroic or characterful poses. The US figures are wearing full packs and carry M16’s. They are depicted in a range of poses, from firing from the shoulder to directing others. The only ‘historical’ discrepancy I can see is that each figure only has one water bottle on his belt, as opposed to the two that most soldiers carried due to the heat.

The Vietcong are depicted in similarly active poses to the Americans and are armed with a variety of weaponry, from the SKS rifle to the ubiquitous AK47, with one possible veteran fighter toting a French Mat-49 SMG. These figures also carry a lot of equipment, whether in backpacks, blanket rolls or shoulder slung haversacks. There is a mix of headgear from Chicom cap to ‘coolie’ hat.

There are two packs of each at the moment, with many more planned, like these Cthulhu-esque Frogmen with AK47s. As a fan of the Pulp Figures style, I like these but some ‘historical’ purists may baulk. Let them, I say! These are great figures and are intended for use within an intriguing, 1960’s Irwin Allen-type adventure background, with just the right hint of Pulp that implies.