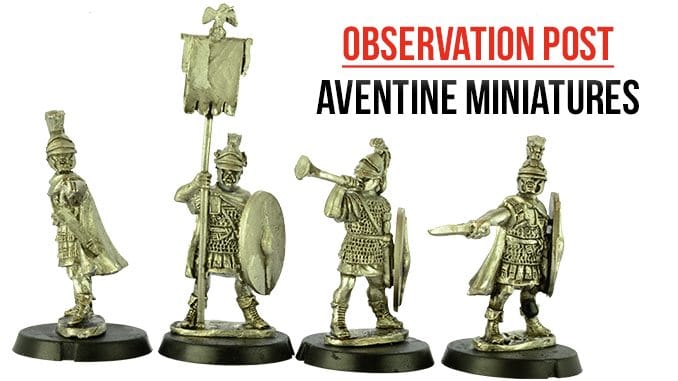 Aventine Miniatures have a number of ranges for the Ancient period, from Republican to Late Romans, Greeks and many more. Some of their most recent releases are for their Succession Wars range. We’ve picked out just two packs that illustrate the fantastic quality of these miniatures.

SUC04 consists of four thorakitai in mail, depicted in standing poses. These are armoured and helmed warriors, clad in mail with a newly designed oval thureos shield, an Ascalon styled helmet and spear. The spear and shield are separate pieces which must be glued in position.

SUC05 also has four figures and comes with a choice of six separate heads. The pack comprises of a standard bearer, musician and two officers. All are in mail, with the two officers and standard bearer wearing cloaks. There are three of the new thureos shield in the pack, leaving one of the officers without a shield.

The quality of the sculpting on all of these miniatures is extremely impressive. The level of detail on clothing and armour really stands out and shows a high level of research. Given that the company produces figures for a host of different armies, Aventine could become your company of choice for a ‘one stop’ shopping experience.