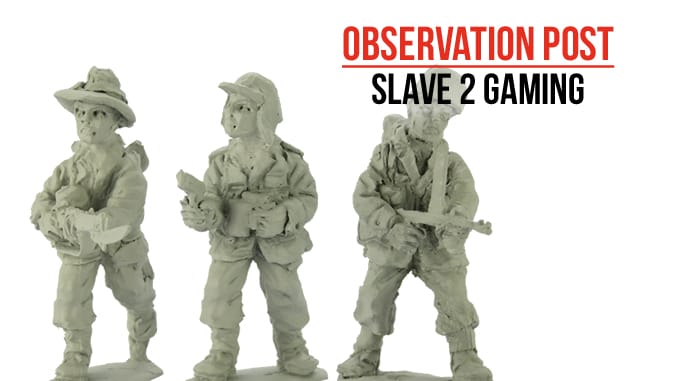 Slave 2 Gaming of Australia have expanded their range of historical miniatures to offer 28mm Australian troops suitable for service with United Nations forces during the Korean War.

The figures being offered come with a choice of heads and backpacks. In addition to the somewhat traditional slouch hat, gamers can decide to field their troops in ‘soup bowl’ helmets of the winter hats with ear flaps, or any combination there off.  There is also the option to add a choice from a variety of backpacks to the rear of the figures.

The range includes figures with rifles, Owen SMGs, Bren gun teams and heavier weapons such as the Vickers Medium Machine Gun. There are also packs of officers and NCO’s to lead the various advancing, shooting and charging figures into action.

The basic infantry packs consist of four figures, whereas the weapon teams and command options have two figures per pack. The head sprues are a random choice per pack, and the backpack sprue is a separately bought option. All the figures are cast in metal, and are well sculpted by top sculptor Mike Broadbent.

These are a fitting homage to the troops which fought during the Korean War, and a great option for those looking for something different that other companies may never offer.