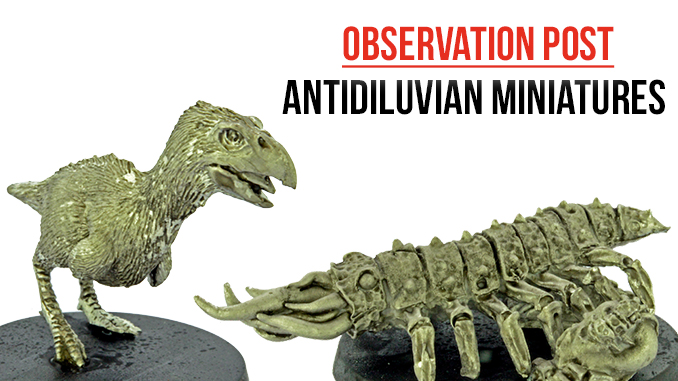 The Lost World figure is an example of a Terror Bird, or Phorusrhacids, the large, flightless, carnivorous birds which roamed South America and were apex predators. This particular rendition is taller than a human scaled figure and is posed in mid stride, perhaps having spotted its next meal.

The first of two Fantasy offerings are a ‘Cadaverpillar’, a large centipede type creature with a maw full of writhing tentacles. This looks like a beast from one’s nightmares, and comes complete with the skull of an unfortunate victim. There is also a base of much smaller versions of the creature, presumably its offspring.

The final pack is from a whole range of ‘dog-faced’ Orcs, although they look more like the Kobolds from 1st Edition Dungeons and Dragons to me. This particular pack consists of a Roman-styled ballista with two crew, one preparing to fire and the other standing ready with another bolt. Dressed in mail, cloaks and horned helmets, these ‘Orcs’ would make a nice ‘old school’ warband or army for those looking for something different.

Although a small company, the diverse nature of the figures from this company make them one to watch out for in the future. These types of company are the backbone of the hobby industry, offering something unique or different to the gamer.