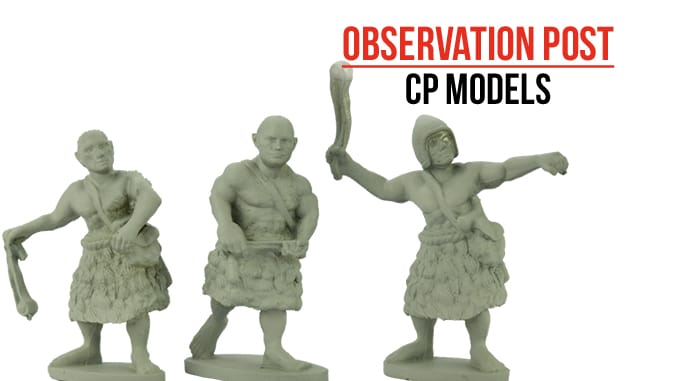 We’ve covered figures from CP Models before, but it’s always worth taking another look. This is a small company which offers a host of different ranges and is forever adding to them or creating new ones. Some of the most recent releases are these Ancient Sumerians in 28mm, cast in metal.

Sumer was an ancient civilisation located in southern Mesopotamia, consisting of several competing city sates such as Kish, Uruk, Ur, and Larsa. When not fighting each other, the Sumerians could be found fighting the various barbarian tribes of the deserts and mountains, such as the Gutians and Lullubi.

Provided for review are three figures armed with slings, two figures designed with open hands and supplied with separate weapons and shields, two figures from an infantry command set and a single Sumerian king with crowned helmet and sword. Each one is well sculpted and has a pleasing level of detail. This can be exploited during the painting stage by using base colours and washes.

There are currently 15 packs in this range, allowing for the creation of a reasonably diverse force. In addition to infantry, there are also a number of chariots and some mounted figures, plus archers.