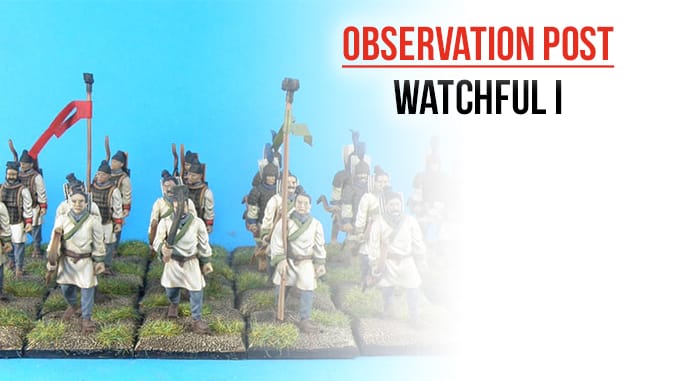 Available from Watchful I Studios and Ainsty Castings, these Ancient Chinese Warriors are designed to serve as any one of the factions associated with the Warring States era, a time of great turmoil in Chinese history.

The first pack sent to us for review is 5 figures from the Light Archers Regiment Marching, QIN 124 (seen below). This pack is shown on the Watchful I website as consisting of 10 miniatures but Ainsty Castings, UK and Europe retailers, appear to have split the original pack into a smaller one.

These are lightly armoured infantry are lightly equipped enabling them to maneuver quickly about the battlefield equipped with bows and the set includes an officer and standard bearer. The metal miniatures consist of components that may be assembled as desired. This unit contains 5 Light Infantry bodies marching, 1 sword wielding arm, 1 head sprues containing 5 different heads, a random officer head, a banner pole arm, 5 arrow quivers and 5 bows. The figures come with a ‘slotta base’ tab designed to fit into a chosen style of base (not supplied).

The second pack is a single Ancient Chinese Foot Officer. The foot officer pack includes one body and several head and arm options allowing you to create a unique officer for your army. Consequently, this metal miniature requires assembly.

The pack contains1 foot officer marching, 2 Arm sprues, one which contains a right and left arm drawing a sword, and the other has 3 right arm options and 1 left arm and lastly a Head sprue that contains 4 different heads. Again, this figure is designed to fit a slotta base.

These are well cast figures with a good range of options. They are also fairly generic, meaning that they could represent troops from any of the main States involved in the war.