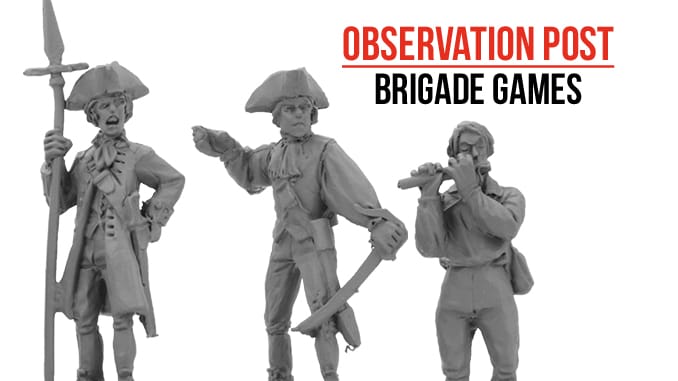 Brigade Games have long worked with ace sculptor Paul Hicks to produce some of the best figures on the US market. One of the most recent releases is an excellent set of miniatures for the American War of Independence, hopefully the first in a series of releases.

The figures in each of these packs are of a consistently high quality in terms of uniform details, weaponry, and overall look. Paul Hicks has worked closely with Brigade to create exactly what AWI gamers need, accurately depicted troops of the time and enough of them to allow beginner and veteran to field decent sized regiments or companies from the get go.

With so many figures in the initial release, it is impossible to show them all. We simply selected a variety of figures from a number of packs to highlight just how special these are. Granted, the ‘American’ 28mm is not always spot on for the ‘UK’ version, but then again, people aren’t the same size either. These would work well in units together, but could also add variety to similarly sized realistic figures.

These days, given the length of time Paul and Lon have been around, one can become complacent about the next release. However, both of these industry stalwarts continue to offer high quality miniatures and support to the wargaming market that really helps to set the standard for others.