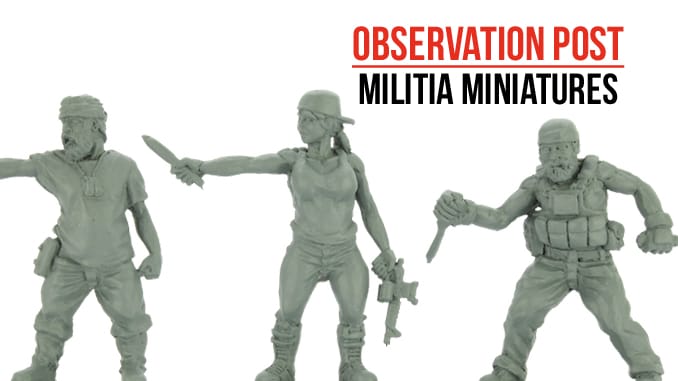 Towards the end of 2018, Militia Miniatures ran a Kickstarter campaign to fund 50 28mm sized ‘Bad Guys’ for their Modern Mercenaries to fight. These are now available for retail customers to buy.

Received for review are two packs, one containing 5 miniatures and the other 1 character or leader type. These are American Survivalists, essentially 5 Redneck types armed with a variety of weapons and 1 character to guide them. These aren’t your average, dedicated Doomsday Preppers but are actually the ‘bad’ survivalists beloved of certain movies and certain TV shows.

Each of these figures is a character in its own right, in a mix of T-shirts, jeans and dungarees. The weapons mix ranges from AR-15s to grenade launchers, combat knives, single barreled shotguns, hand grenades and some type of pistol with drum magazines.

The 5 miniature pack has 4 bearded males and one rather tough looking female, in either bandanas or baseball caps. The single miniature pack has a quite rotund figure in sleeveless vest, shaking his right fist at the world and wielding an M4 carbine in the left. He looks every inch the leader, almost presidential, ready to lead his followers to greatness.

These are well-sculpted miniatures, with a real sense of character and numerous applications. The whole ‘Bad Guy’ range is of a similar quality, and includes Cartel Soldiers, African Insurgents and much more.