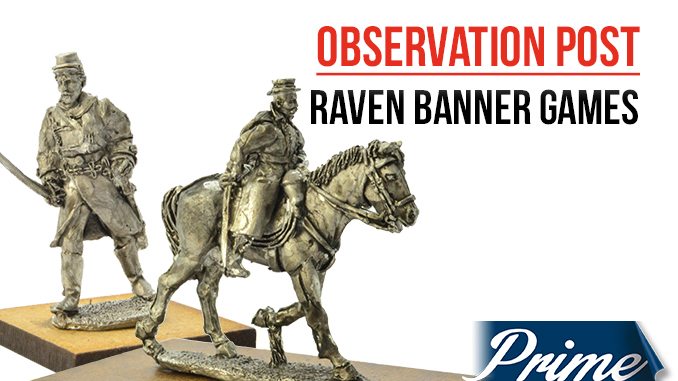 Raven Banner Games aim to offer something more than the usual for the American Civil War gamer, picking subjects that aren’t always tackled by other manufacturers.

We decided to pick out a few figures from various packs in order to convey an overall impression of the range. One of the first points to make is that these are offered as 28mm figures but are more realistically proportioned than many others on the market. Consequently, they may not scale with every manufacturer’s offerings, especially those produced in Europe, but are excellent sculpts nonetheless. They would fit quite well with many of the Perry Miniatures or Foundry ranges, especially the former’s plastics, and any other range marketed as 25mm.

Some of the more unique aspects of the figures are the Union mounted officers in greatcoats, the Union officers on foot in greatcoats, a Confederate officer with looted items and the character figures like that of Confederate General Albert Sidney Johnston waving his kepi in the air, as seen at the Battle of Shiloh. Every miniature is a character, with fantastic attention to detail in terms of uniforms and, in the case of Johnston, a distinct facial likeness of the subject, created without any attempt at caricature.

These are the types of miniatures that any ACW gamer would like to own, variants in greatcoats for winter warfare, command models and the opportunity to create vignettes to enhance the battlefield. Well worth the look for those who have figures of a similar size or wish to add something different to their collection.