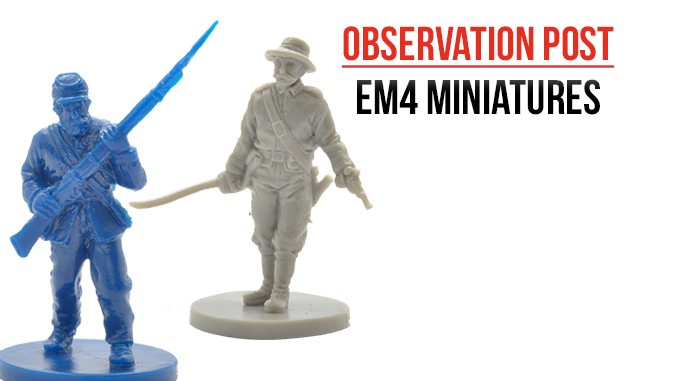 The miniatures are provided in reasonably hard plastic, although the weapons and banners are a little bendable. The Confederate Infantry pack consists of 20 figures, all in soft, wide brimmed hats. There is a mixture of shell jackets and frock coats, with blanket rolls worn across the torso. There is a command unit consisting of a standard bearer, officer with sword and pistol, and drummer. There are 10 basic poses in all, with two of each, making up the 20.

The second bag of miniatures is designed to represent Union infantry in frockcoats and kepis. These figures have no blanket rolls and the officer wears his coat partially open, again forming part of a command group with a standard bearer and drummer. Again, there are 10 basic poses, doubled in the pack, with 20 in total.

Although these figures are plastic and lack something in detail, in size and stature they are akin to those produced by Perry Miniatures, albeit in no way as well sculpted. Still, the ‘no frills’ approach of the company, providing the miniatures in a ziplock bag for the price of £5, means that it is possible to ‘bulk out’ your regiments and armies remarkably easily with some good quality plastics. Plus, for those on a budget, that ‘front rank’ of top quality figures backed up by less expensive members is usually enough for tabletop use, especially given that the money saved can be invested into other aspects of your army.