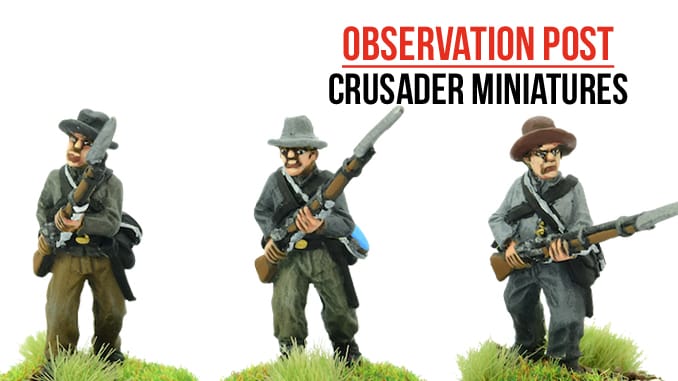 Crusader Miniatures and North Star have continued to add to their excellent American Civil War range with new packs of infantry and artillery crew for both sides in this ‘brother against brother’ conflict. Each pack contains four metal miniatures.

The first pack is ACW033 – ACW Infantry Shirt & Hat Skirmishing, This consists of two figures standing and loading, and two figures firing, one from the kneeling position. They wear typical wide brimmed, somewhat shapeless hats of the period.

Next, we have samples from two different command packs, with officers wearing frock coats and kepis and two different drummer boys.

The final complete pack is ACW055 – ACW Artillery Crew in Hats, consisting of four figures in a range of poses, standing ready to fire their artillery piece.

These are well sculpted miniatures and represent an ongoing expansion of this excellent range. They fit in nicely with miniatures from this company, although they may be a little large compared to those from others.