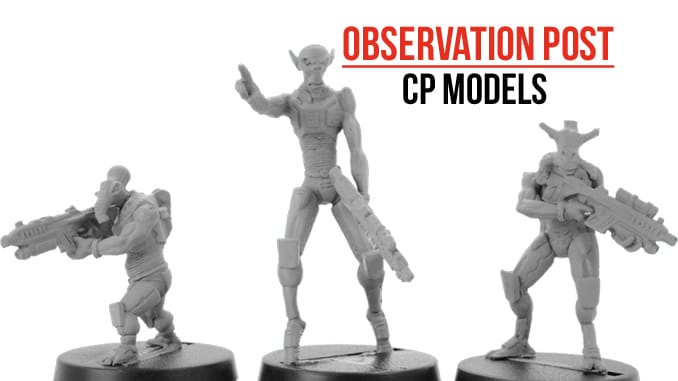 CP Models produce some excellent miniatures across a number of gaming genres and sizes. The Alien Federation range consists of a number of alien troopers from a number of different racial origins, united in defending their galaxy against all enemies.

These figures all wear some form of battle armour and are armed with similar weapons. Each one wields a similar weapon, implying that they are a part of an organized military.

Although they are sculpted in the same figure ‘scale’, each one is from a unique race and differs in size. Consequently, it is simple to produce a varied force of warriors.

All the figure sculpts in this particular range are suitably original, influenced by the work of sculptor Mark Dixon, rather than merely what is already available on the market. They make a refreshing change in a sea of ‘stolen’ concepts.

The CP Models ranges all offer something different to the gamer and collector. As always, it’s the smaller businesses that can afford to be innovative and dare to be different. If you’re looking for a legion of aliens or just want to stand out from the slightly tired industry norm, take a look at this UK-based company.