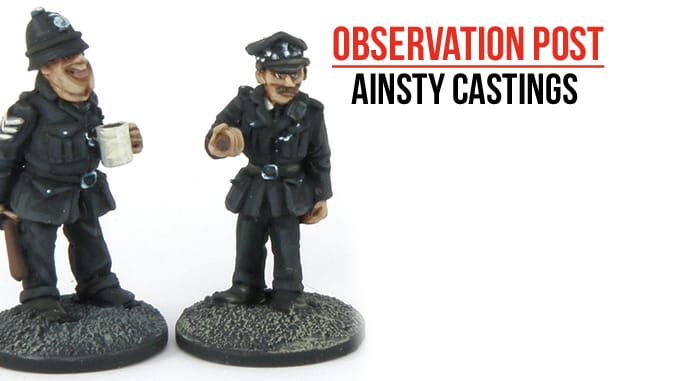 Ainsty Castings Aggro! rules, (featured in WI 327 January 2015), offers an exaggerated version of violence on the football terraces in 1970’s Britain. Just The company have recently added new packs of figures to the range, representing those on the wrong and right side of the Law.

First, we have a pack of four hooligans. One taunts the other team’s supporters or calls for support, another large, bald chap extends his hands in the classic ‘come and have a go!’ pose, another cups himself whilst hurling abuse and the last is posed in, er, what we could call ‘full moon’ position, trousers down and showing all he has in his rear quarters and more to the world.

The second pack sent for review consists of two police officers, one a large, jolly looking fellow clutching a mug in one hand but ready with his truncheon in the other. The second figure represents a senior officer, perhaps a Chief Inspector or higher, complete with swagger stick tucked under his arm.

All these miniatures are sculpted in a characterful, exaggerated style, almost comic book like, as befits the concept of the game. If you grew up in the ‘70s and ‘80s in the UK or even over in Europe, you’ve seen some of these faces before, probably on the evening news. These are useful additions to a range that needs more attention, if only because they are one of the few unarmed civilians on the market.