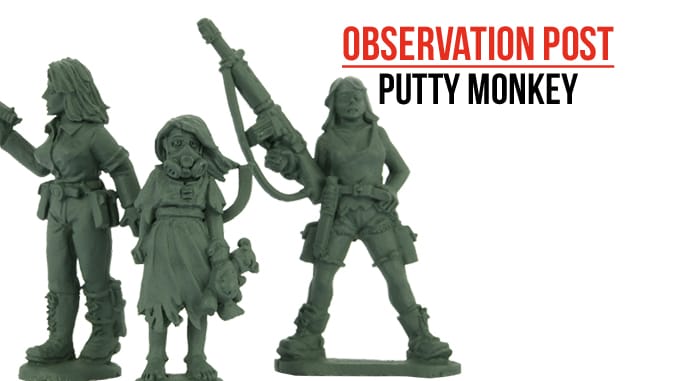 Putty Monkey, AKA sculptor Mark Evans, recently ran a Kickstarter campaign to fund the production of a number of figures based upon the Aftermath RPG that first appeared in the 1980’s.

Aftermath is set in a post-apocalyptic world in which the characters typically had to fight for food, water, basic supplies and shelter. The rules are of their time but reward the effort made to immerse oneself into the charts, tables and information on offer. The nature of the Apocalypse is up to the Games Master but it is often reminiscent of the Mad Max movies. There is also an expansion, Aftermath! Magic!, which allows play within a universe dominated by dragons in the style of the Reign Of Fire movie.

The 4 figures received for review are based upon images found on the cover and internal pages of the book. The male and female figure shown is taken from the cover image, which is a memorable one. The female figure is dressed in shirt and trousers, wielding an auto-loading pistol, but it’s the male figure that is probably more memorable. A strange looking helmet and padded armour with wristguards and a cavalry sword is juxtaposed with an M16 with fixed bayonet.

The next figure is entitled ‘London Lady’ and consists of a tough looking female in ragged top, holding an L1A1 ‘SLR’ in her right hand. She’s a survivor, and ready to face whatever comes her way.

The last figure is entitled ‘Gauntlet Girl’. The figure is of a young girl, perhaps 7 or 8 years old, wearing a ragged dress and holding a teddy bear in her left hand. A gasmask conceals most of her face, but the curved knife in the right hand hidden behind her back suggests this may not be a youngster who needs help, but instead has plans for those who try.

These are only 4 of a range of miniatures on a similar theme which are available from the Putty Monkey website. Take a look and see what can be found.