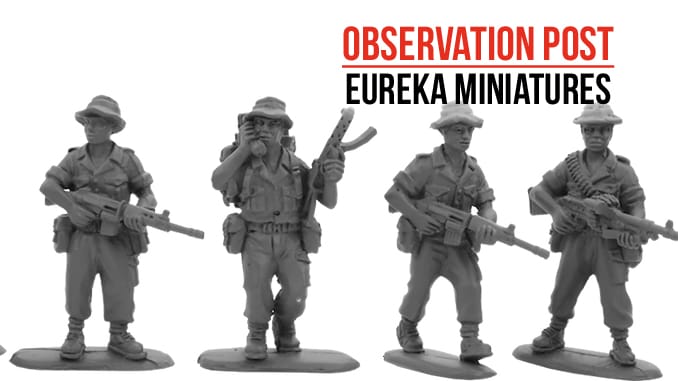 The 1967 Aden Emergency was one of those ‘End of Empire’ wars in which many British troops served but is now largely overlooked. However, Eureka Miniatures have a range of figures for both sides in the conflict, and very nice they are too.

The two packs we have for review represent standard British Infantry in tropical gear and the Yemeni tribesmen that opposed them.

The British figures are all in shirtsleeves with bush hats. They carry belt equipment and have either Sterling sub-machine guns or SLR rifles. The range includes a squad support weapon in the form of a GPMG machine gun, and a command pack with officer, NCO and radioman. Most of the poses shown are depicted as ‘on patrol’.

In contrast, the Yemeni tribesmen wear civilian clothes and carry WW2 era weapons, such as the Lee-Enfield rifle and a Sten sub machine gun. One of the figures holds a curved dagger aloft, and these are in either firing or advancing poses. Most wear bandoliers of spare bullets.

These are well sculpted miniatures, for a conflict that would work as a series of skirmish games between Yemeni nationalists and British colonial forces. Eureka Miniatures has 28mm figures for a whole number of Modern wars from the 1950’s onwards and are always worth checking out.