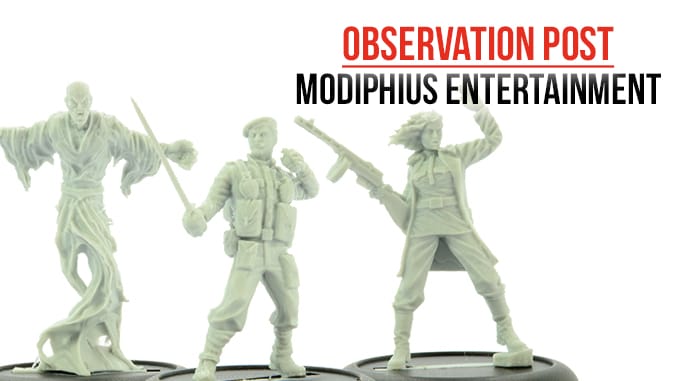 Modiphius Entertainment continues to support their Achtung! Cthulhu Skirmish game and the roleplaying version with these latest packs from their ongoing miniature releases.

Sent for review are a box of five metal miniatures that represent a number of commanders of the Black Sun. The Black Sun is a secret society within the Nazi infrastructure who seeks to use the power of the Elder Gods for their own benefit and that of the Third Reich.

Also sent for review are four resin miniatures that are due to be released this summer. Two of the figures are from the upcoming Section M – Natalya Unleashed pack, which consists of one female operative of the Allied Section M, the main force acting against the Black Sun, and a tentacled enemy. The other pack consists of Captain Badger, the leader of Section M’s Badger Commandos, and a ghostly follower of the Black Sun.

Both the metal and resin miniatures in this range are very well sculpted and crisply cast, and are extremely characterful in their own right. Within the context of the Skirmish and RPG rules, they are excellent renditions of the characters and creatures that may be encountered.