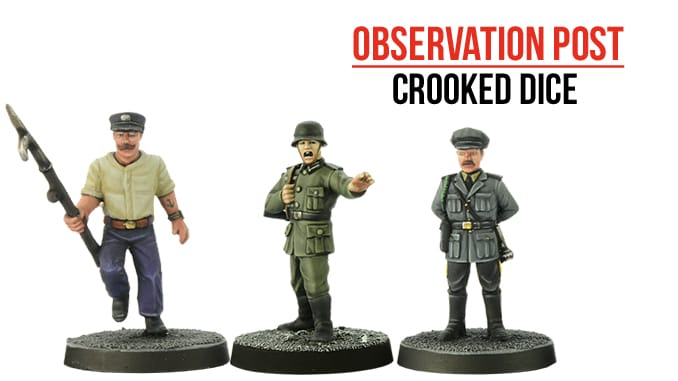 Crooked Dice are poised to release another 7TV boxed set for gamers to enjoy. Themed around the world of Pulp Era adventures, there are many heroes planned but a hero is nothing without his or her Minions.

A number of ‘Minion’ packs are due for release, including the following.

The first pack represents typical Merchant Seamen of the early part of the 20th Century. This pack has 5 miniatures in total, with a range of different poses and equipment.

The second pack is that staple of 1930’s Pulp, a pack of German soldiers in Early War uniform, wielding MP40 or ‘Schmeisser’ sub machine guns. There are 4 miniatures in this first set, dressed in European theatre uniforms. However, there are also rumours of a set or two in Afrika Korps garb…

Next comes a set of four Security Guards, perhaps protecting the exhibits at a museum or similar. These are in uniforms that are akin to those of some State Police troopers of the 20’s and 30’s.

Lastly, we have two denizens of a seaside town or village, perhaps in the state of Massachusetts, USA. They have what could be called an ‘Innsmouth Look’, seemingly hybrid life forms between human and strange amphibian DNA.

These figures are up to the usual high quality one associates with Crooked Dice, and would have a number of uses within 7TV: Pulp and other games. Plus, more releases are planned, including a small ‘minis only’ Kickstarter intended to provide additional Stars and Co-Stars for the range.