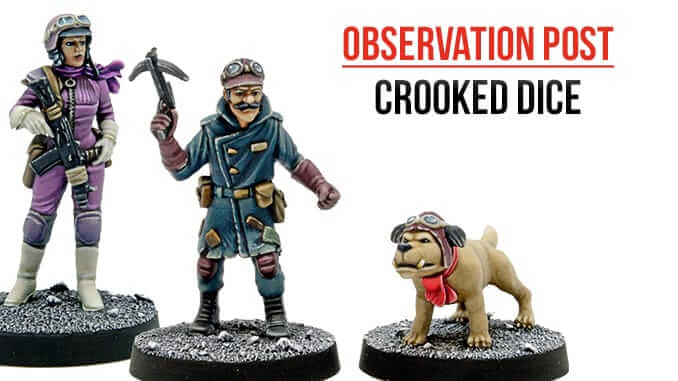 Crooked Dice Game Design Studio have given us a ‘sneak peek’ into one forthcoming part of their Post Apocalypse figure releases. The new game is due to be Kickstarted in the Autumn, which means new miniatures to represent Casts and characters. The names are all working titles at the moment, which will be clarified nearer the time.

The first set is The Villain, a somewhat whacky pair of a rather dastardly looking character and his motley mongrel. The patched nature of the man’s coat suggests he’s had a rough Apocalypse, but he has a pistol crossbow to show he’s not going to take it any more.

Next is The Driver, a tough looking lady who makes occasional pit stops on what’s left of the nation’s highways. That’s why she carries her faithful old assault rifle – nothing charms people more than the offer of a clip full of bullets being loosed if they don’t hand items over.

The age of the car may be dying, but these two Scavengers don’t really care. Mounted on their hardy steeds, they wander from settlement to settlement, hawking their wares or looking for odd jobs to pay for their next meal.

In the Apocalypse, many have taken to a nomadic life, wandering the wastelands as, er, Wasteland Wanderers, stopping off at a town or settlement only long enough trade before heading off once more. These three figures epitomize those whom find themselves seeking a new way amongst the wreckage of the old world.

Lastly, these Militia serve the local Warlord or town Mayor, keeping the peace and protecting residents from the trouble the Apocalypse has wrought – or perhaps they are the trouble, flaunting their military grade weapons and ruling through fear.

These are just some of the miniatures that will be released to supplement the new 7TV: Apocalypse boxed game. Given that the game rules are intended to allow players to game any type of Apocalypse they can imagine, it’s safe to say that a whole host of miniatures is needed to cover all 135+ character archetypes. The game also includes the first set of fully realized vehicle design and combat rules from the Crooked Dice stable, with a number of vehicle models, plus three characterful settings to get you started in an Apocalyptic fashion. The future is Apocalypse, so get prepping now!