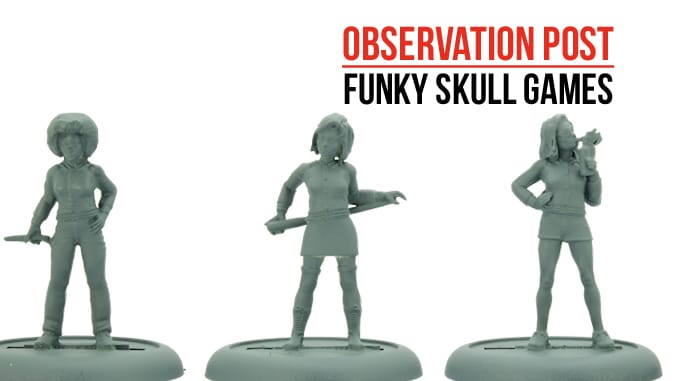 Funky Skull Games have added more miniatures to their Street Wars NYC rules and background. After another successful Kickstarter campaign, The Mollies Gang is now available for sale.

The Street Wars NYC background takes a partially fictionalised slice of life on the tough streets of 1970’s New York City. The city had areas of slums and a crumbling infrastructure, with disaffected youth looking for an outlet for their frustrations. This led to the creation of inter-racial and cross-gender gangs who organised to protect their ‘turf’ in an almost tribal fashion.

The Mollies are an all-female gang, which follows the same format as the others in the range, 8 metal figures in a variety of poses. Each figure represent the gang wearing their Mollies gang attire, but with their own unique style. They armed with a mix of mostly baseball bats, although one figure sports a flick knife, another sports a chain and, my favourite, a young ‘lady’ causally lighting a cigarette from her Molotov cocktail. In true ‘70s fashion, one of the gang members wears roller skates, perhaps to relay messages more rapidly between the members of the gang.

These are really characterful, very well-sculpted miniatures, and would work with any system which has a focus on the 1970’s or beyond. It’s also nice to see some tough looking, sensibly attired female figures for modern settings. Each gang comes in their very own retro VHS themed case and the whole range is of a high quality.