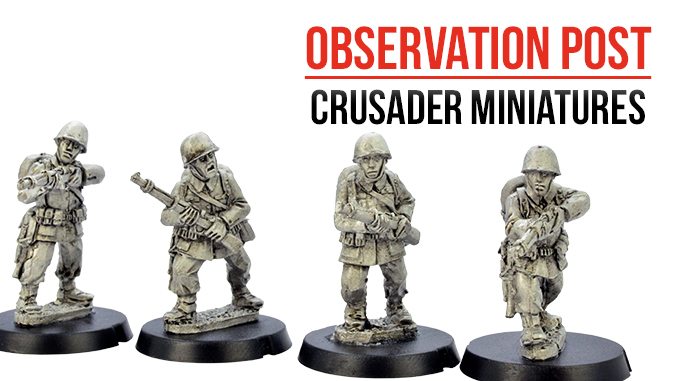 Crusader Miniatures, manufactured and distributed by North Star Miniatures, have added more Early War figures to their World War Two range. This time, they have created the first in a number of packs representing the brave members of the Polish Army who faced the invasion of their country by Germany in 1939.

Sent for review are WWP004 – Polish Command and WWP001 – Polish Riflemen. Each pack consists of four miniatures in suitable poses.

The Command pack contains two officers, one in the Rogatywka or ‘peaked cap’ service headwear, the other in the Polish style helmet of the period. The other two figures are an NCO or similar in full field pack with a rifle, pointing as he issues orders, and the other in the same outfit but posed in the process of throwing an egg-shaped grenade.

The Riflemen pack has figures depicted in full pack and equipment, with one standing firing and the others advancing into action. The equipment and uniforms are well sculpted and accurately depicted, right down to the Carbine wz.29, a bolt-action rifle which bore some similarities to the German Kar. 98K.

These figures are most suitable for resisting the German invasion in 1939. They are but the first of the miniatures from Mark Sims, the main sculptor behind the Crusader ranges. The attention to detail is of a high standard and the figures would suit more than one style of painting. A good start to what will no doubt be an excellent range.