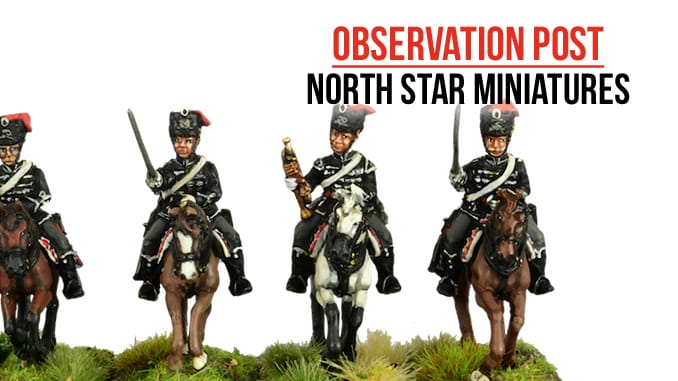 The North Star 1866 range has seen the release of new sculpts of Prussian Hussars, both Command and trooper packs.

The Austro-Prussian War (known as German War, Seven Weeks War, Unification War, German Civil War or Fraternal War) was a war fought in 1866 between the German Confederation under the leadership of the Austrian Empire and its German allies on one side and the Kingdom of Prussia with its German allies and Italy on the other, that resulted in Prussian dominance over the German states. In the Italian unification process, this is called the Third Independence War.

There are three mounted figures per pack, all wearing the standard uniform of the period, complete with swords and carbines. The command group consists of an officer, trumpeter and standard bearer.

These are very nicely sculpted figures, with some high quality animation and real attention to detail. The 1866 range is full of similarly well sculpted miniatures, which are suitable for a number of other wars during the 19th Century. This range of figures is a co-operation between Helion and North Star, making figures in tandem that are compatible with each other, making it possible to collect a wide variety of poses.