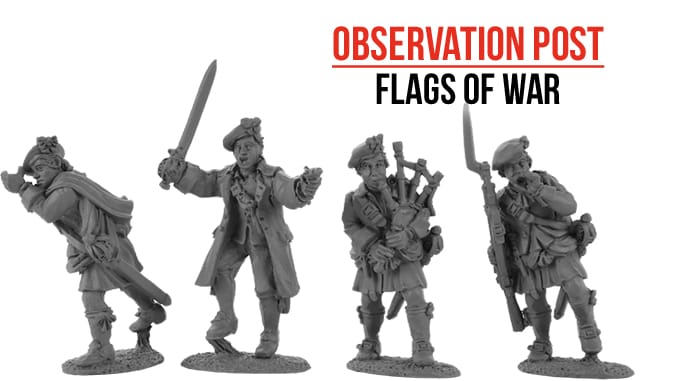 Having run a successful Kickstarter campaign, Flags of War have managed to fund a new range of Jacobite Rebellion Scots that cover many of the troops types of the period.

These figures are pleasingly ‘chunky’ whilst still retaining a sense of realism. The detail is nicely etched and the attention to equipment, clothing folds and posing is of a high standard.

Received for review were two packs, a Highland Command Charging and Charging Jacobite Characters. The command pack has a leader, standard bearer, piper and musket armed sergeant or similar, all nicely animated. The charging pack also contains 4 figures, armed with various weapons including broadswords and a double-handed claymore, plus the buckler-style shields of the period.

These are great figures, which would fit with most of the ranges currently available but could be all you need to field a characterful army on the tabletop.