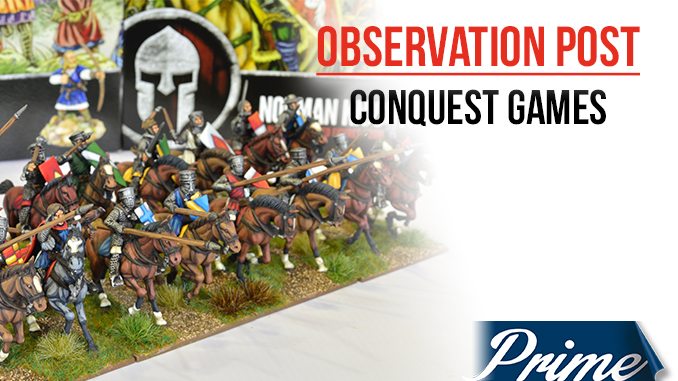 Conquest Games have an increasingly useful range of plastic and metal miniatures. Alongside generic warriors on foot and mounted, there are heroes or outlaws who hide in the forests themselves.

The most recent impeding release are Medieval Knights, plastic multipose figures and their mounts who can be assembled using a number of options. Included on the frame are heads and weapons to enable the gamer to represent knights from the reign of King John and also the time of the civil war between King Stephen and Matilda, known as The Anarchy. Lances, hand weapons, armoured and unarmoured heads, shields and more are included on the frame, allowing each rider to be fairly unique. The horses are in fairly standard poses, charging, trotting and walking. These are well detailed and would be a worthy addition to a number of tabletop forces, whether large-scale skirmish like Lion Rampant or the creation of large units for use with the Swordpoint rules.

Amongst the ranges offered in metal are two similar sets of Robin Hood themed miniatures. One set of miniatures can be firmly said to be 25mm sized, Merrie Men 1 and II, whilst pack Merrie Men III are in 28mm size. This is a fairly unique approach, offering broadly the same miniatures in two different sizes. Yet, by doing so, the company allows gamers a choice in which to use for whatever compliments their army. If other companies did the same with character figures, perhaps there would be fewer complaints about scale creep. Personally, I like my characters to be literally ‘larger than life’, to help them stand out on the tabletop.

Plus, in addition to the historical and arguably mythological, here’s a sneak peek at one of the forthcoming ranges from this small company, Anglo-Saxon Zombies after revenge for their defeat in 1066!

This is a small company but one that offers an increasing selection of high quality miniatures. For those interested in the Norman and later medieval period, there are a number of figures that would be useful. In addition, this is a growing company, and worthy of support from those seeking a slightly different approach.