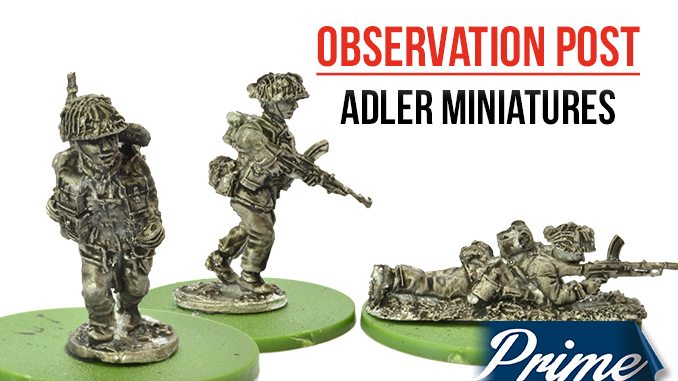 Adler Miniatures continue to add to their excellent range of World War Two miniatures. We received samples of British infantry to take a look at.

We picked out a pack of British infantry for the late war period, designed to be used during the winter and spring of 1944 to 1945. These figures wear the two-piece windproof uniforms and would also serve as Commonwealth troops in Europe. We looked at pack BWS1, six figures representing a Bren gun team both moving and in action.

The level of sculpting and attention to detail on these figures is excellent. The depiction of kit, from small packs to neck scarves, is superb and just crying out for a careful basecoat, a wash of a suitable shade and a little highlighting. The sense of motion in the moving Bren gun team and the detail on the bases for the prone firing team is great. I also like the fact that the ammunition carrier for the Bren gun has not only extra pouches stuffed with magazines but also carries the right style of shovel, the British GS ‘T’ handle. According to the website, this is available in the Canadian ‘D’ type as well, an option that not many companies offer.

The other figures in this range are equally as good and cover a number of subjects, including some nice crew for use as gun layers and ammo handlers in the SDKFz. half-track. Again, there are options here with crews in shirtsleeves or denim Panzerjacke. The other British infantry figures continue the theme of attention to detail, great poses and excellent sculpting with painters in mind. One of the upcoming releases from Adler is US Airborne, which will no doubt be to the same standard. A really great range of miniatures that we look forward to seeing more of in the future.