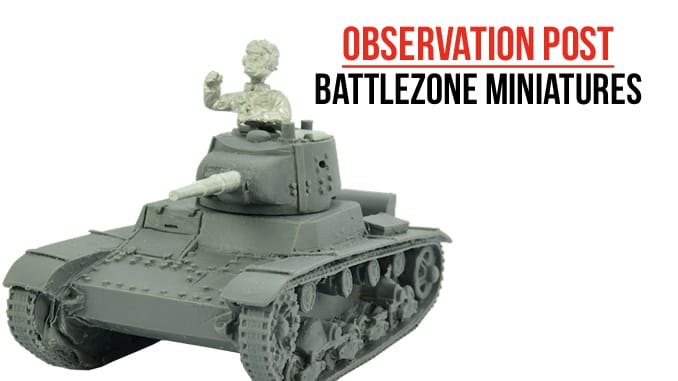 Battlezone Miniatures have once again teamed up with Early War Miniatures to produce more additions to their excellent 20mm Soviet range. We’ve picked out two of those releases to look at this time around.

The first tank is the T-26 Twin Turret Tank which was produced from 1931-33, although some were still in service during the German invasion of 1941. This is the twin machine gun version and would have had two DT light tank machine guns.

The model is made from a plastic polymer and comes ready built, all you need to do is add the gun and decide upon whether you use open or closed hatches and whether to add crew and stowage. The crew figure has a separate head for posing options.

The hull and tracks are one piece and cast in resin, with the turrets, guns, hatches, single crewman and the stowage in white metal.

The second tank is the T-26, which, in typical Soviet fashion, was constantly upgraded. This version was produced in 1940 and had a conical turret and applique armour.  It was remarkably similar to the 1938 version, with the only noticeable difference being the turret hatches. It was armed with a 45mm gun and a DT co-axial light machine gun.

This model is also made from a plastic polymer and comes ready built, all you need to do is add the gun and decide upon open or closed hatches and whether to add crew and storage.

The hull and tracks are one piece together with the turret cast in resin, with gun, hatches, a crewman and stowage in white metal.

These are nicely sculpted miniatures, which would fit with a variety of 20mm ranges.  The Battlezone range is still expanding but is rapidly becoming one of the better new ranges on the market for those looking for early World War Two tanks, troops and transport.