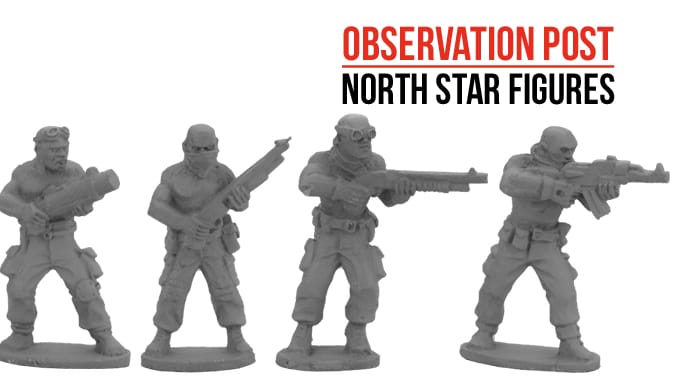 North Star are official ‘Friends of Gaslands’, supporters of the ridiculously popular Gaslands Refuelled rules from Osprey Games. Having released a frame of plastic parts and motorcycles for the game, they have managed to persuade the incomparable sculptor Mark Copplesone to produce a number of packs of metal cast figures.

Having begun with the Interceptor Driver two figure pack of a standing and seated anti-hero, they have added two new packs, NSPIoC09 – Wasteland Warriors (Drivers and Passengers) and NSPIoC10 – Wasteland Warriors. These are each five figure sets, roughly 20mm scale, with the first being designed to be used as crew for Hot Wheels/ Matchbox style toy cars. There are drivers, gunners and passengers just asking to be added to the type of vehicles used to the furious nature of the road.

In contrast, NSPIoC10 – Wasteland Warriors are perhaps the same five figures from the above pack, but this time out of their vehicles and on foot, armed with various weapons from assault rifles to grenade launchers. These are ready for adventures within the shattered world of the Gaslands Refuelled universe, taking on other gangs or sifting through the corpse of the old world.

These are fantastically sculpted figures, which really evoke a post apocalyptic theme. The driver and passenger figures are simply ‘dressing’ for vehicles, but the standing figures would work well with our own ‘unofficial’ skirmish rules from WI 386, An Out of Vehicle Experience.