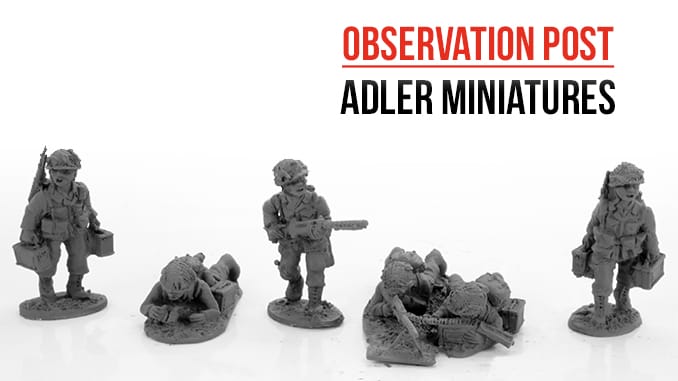 Adler Miniatures continues to add to their 20mm World War Two ranges with this excellently sculpted US Airborne sub-range in the M43 uniform and equipment.

Chosen for review is pack USPS 1, Set A, which consists of a moving and firing machine gun team armed with a .30 Caliber 1919A6. There is a 3 figure prone team and a 3 figure moving team, which can obviously represent one MG team in two different states or two separate teams on the tabletop.

The miniatures are wearing the M43 uniform, making them suitable for some of the units that landed in Normandy, Operation Market Garden and beyond. They all wear camouflage net on their helmets, liberally festooned with ‘disruptive materials’. They wear full equipment, and carry boot knives, plus the moving and prone versions have plenty of spare ammo. As a consequence of all this, they actually look like ‘real’ paratroopers rigged out for a combat environment.

These are just one pack in an ever-growing range of excellently sculpted miniatures from a company once known for 6mm figures. As 20mm continues to see a resurgence in use for WW2 gaming, it’s good to know that modern sculpting techniques are being used to craft useful miniatures.