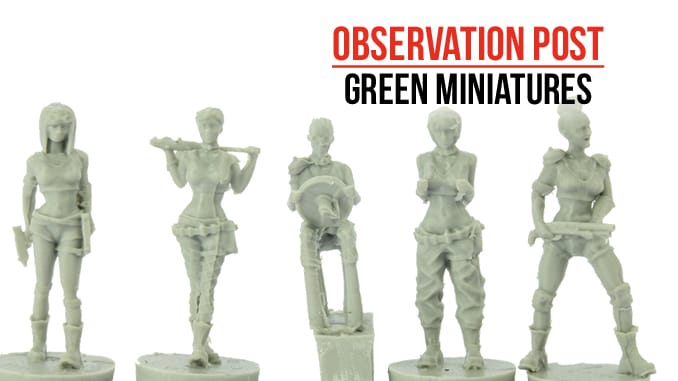 Green Miniatures of Poland are huge fans of the Gaslands rules from Osprey Games. So much so, they’ve created a range called Mad Cars, full of parts and miniatures to augment your auto dueling gaming experience.

Created with the use of CAD, the range consists of various figures in approximately 20mm size that are designed to be used with 1:64 scale diecast cars or similar. There are seated drivers, standing character gangs, figures designed to hang out of windows in firing poses, futuristic and basic motorcycles and even a chariot towed by twin motorcycles!

The packs chosen for review are the Dangerous Women and Nu-Kaneda Bike.

The Dangerous Women pack consists of 5 figures in what could be said to be Post Apocalyptic Wasteland ‘fashions’. Two of the figures carry firearms, one nonchalantly carries a spiked club across her shoulders, there’s a standing figure with hands raised to fire a vehicle mounted weapon and the last is designed to be used as a driver for a vehicle. The level of characterization shown in the faces, poses and sheer attitude of the figures is fantastic.

The Nu-Kaneda Bike wouldn’t look out of place in a futuristic city, perhaps being ridden by a member of a street gang or as part of a computerized combat game. The bike has a fully enclosed rider’s area, and appears to be ridden whilst prone. It sports two machine guns, placing it within an auto-duelling environment.

These are well-sculpted figures, showing CAD and CAM at their best. The other figures in the range are equally as well rendered, and have some familiar faces from certain movies. The company also produces accessories and parts that may be used to enhance your diecast vehicles. Green Miniatures are working towards producing figures in 28 -32mm size at some point in the future, which provides even more gamers with the opportunity to get hold of some very nicely done miniatures.