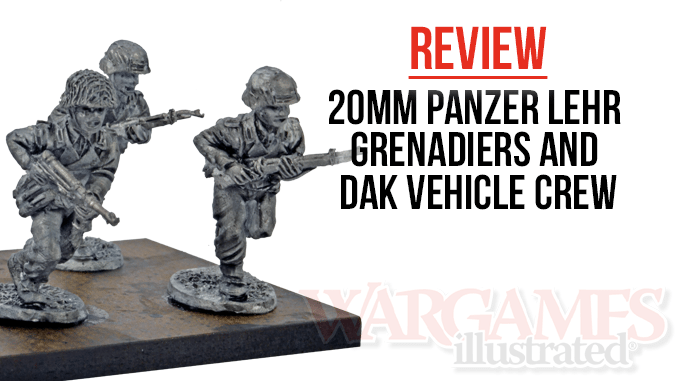 Historically one of the staples scales of World War Two war gaming has always been 20mm due to the widespread availability of 1:76 and 1:72 model kits. While 20mm has always been present it had been somewhat eclipsed by 15mm and 28mm, however with the event of the Battlegroup series of books from Ironfist Publishing and The Plastic Soldier Company with an abundance of 20mm releases it is experiencing something of a resurgence. These two packs from Adler represent vehicle crew in tropical gear suitable to represent DAK forces in North Africa and Panzer Grenadiers wearing Assault Gun Wraps suitable to represent troops from the Panzer Lehr Division in Normandy. The Panzer Grenadier pack contains six figures, five armed with Kar98 rifles and one armed with an MP40 submachine gun, depicted wearing the double breasted Assault Gun Wrap, gaiters, and a mixture of cloth and mesh helmet covers.

The vehicle crew pack contains four half body figures in an assortment of poses wearing tropical uniform including dust masks and goggles and equipped with radio headsets and binoculars. These figures have a superb level of detail coupled with nice clean casts that only require minimal clean up with some nice fluid poses. In both detail and size, they are comparable with figures produced by AB, SHQ, and Elhiem, pricewise however they are closer to AB with a cost of approximately £1.10 per figure compared to approximately £0.75 per figure from Elhiem and SHQ. Where these figures come into their own is that they fill a gap in the market by catering for two specific niches; figures to represent the Panzer Lehr Division in Normandy with the correct uniform and figures to represent DAK troops in tropical uniform.

*I feel that this is both the figures biggest strength and also their biggest weakness, if you are looking for specific desert crew for a DAK themed army or you want to accurately represent the Panzer Lehr in Normandy then these models are indispensable, however if you are looking for more multipurpose models that you can use for multiple theatres then these models may not meet your requirements.

To most people Adler are probably best known as a producer of 6mm figures so these 20mm figures are a bit of a departure from their usual products, however despite this I have been very impressed by their foray into 20mm. The only criticism that I can level at their 20mm range is that there isn’t enough in it! Admittedly the Grenadier pack is part of an initial release along with another pack of riflemen, an LMG pack, and PAK 40 crew pack all due for release on 5th November but considering how nice the grenadiers are I cannot but help wanting more!