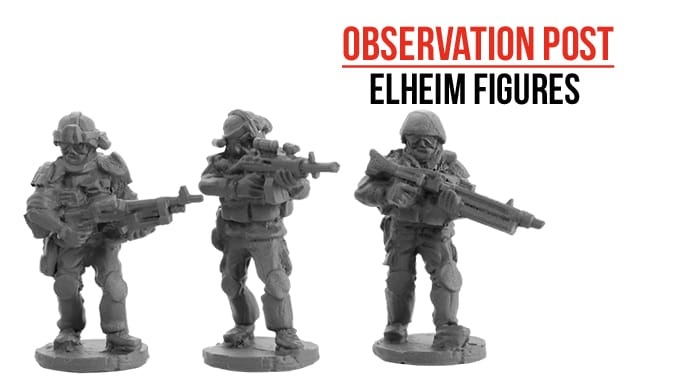 Elheim Figures produce some of the finest 20mm figures on the market. Embracing a whole range of genres, sculptor Matt Hingley is probably at his best when he is able to offer some of the most well-researched and well-rendered Modern and Ultramodern miniatures available.

We have been sent a number of packs of figures, all of a consistently high standard, but we’ve picked out two of the most unique or interesting to us.

The miniatures sent for review are from the Modern Canadian/Danish range. These figures are able to cover both distinct nationalities, the Canadians and Danish, whose equipment looks very similar and whom both use M16 type rifles. The main difference in the squads is that the Canadians use the GPMG, as fielded by the British Army, while the MG3, a descendant of the German WW2 MG42, is used by the Danish. A change in paint changes the nationality basically, like so many of the modern armies which are fielded these days.

The vehicle sent for review is a MRAP-All Terrain Vehicle used by the modern US Army with Mine Resistant Ambush Protection (MRAP) and is fitted with a M153 CROWS remote controlled weapon station (RCWS) CROWs .50 calibre heavy machine gun. The main part of the vehicle is cast in resin, whereas the other parts, such as the wheels, foot ramps and weapon station are cast in metal. The details are all cleanly cast, and captures the sheer size of this replacement for the HMMV or ‘Humvee’.

These are just a few examples of the quality and variety of figures available from Elheim. It’s well worth a browse of the website to find more of the same, all produced with a commitment to quality and detail that is occasionally lacking elsewhere.