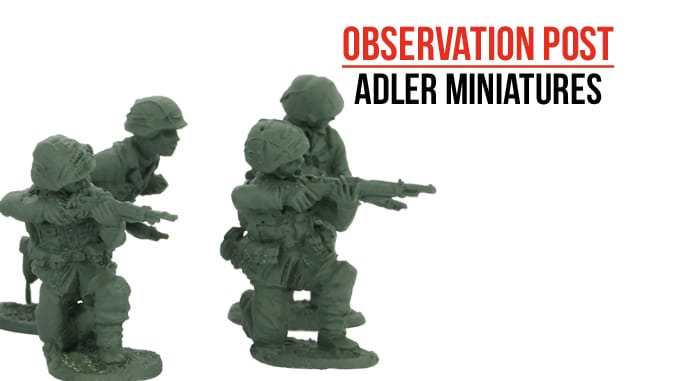 These particular figures are depicted as wearing a two-piece uniform, which was made available in the so-called ‘pea dot’ camouflage. Designed to be worn over the top of other uniform items, this was one of many camouflage designs issued to the German forces. Worn from around the period of the Normandy invasion up until the end of the war, these figures can be used from the Western to the Eastern Front.

Each figure is very well sculpted, with our selection here all being armed with KAR 98K rifles apart from one figure with an MP40. They wear a variety of uniforms beneath their camouflage outfits, from pullovers to shirts and tunics, providing options for all.

These are, as mentioned, simply a selection of the types of figures that are being made available. The complete range will include a HMG, 81mm mortar, Panzerfaust and Panzerschreck operators, gun crew and command sets with NCOs, officers and radiomen.

Having reviewed Adler’s 20mm figures in the past, we continue to be impressed by the quality on offer. If you’re looking for 20mm WW2 figures from a different source, these are well worth a look.