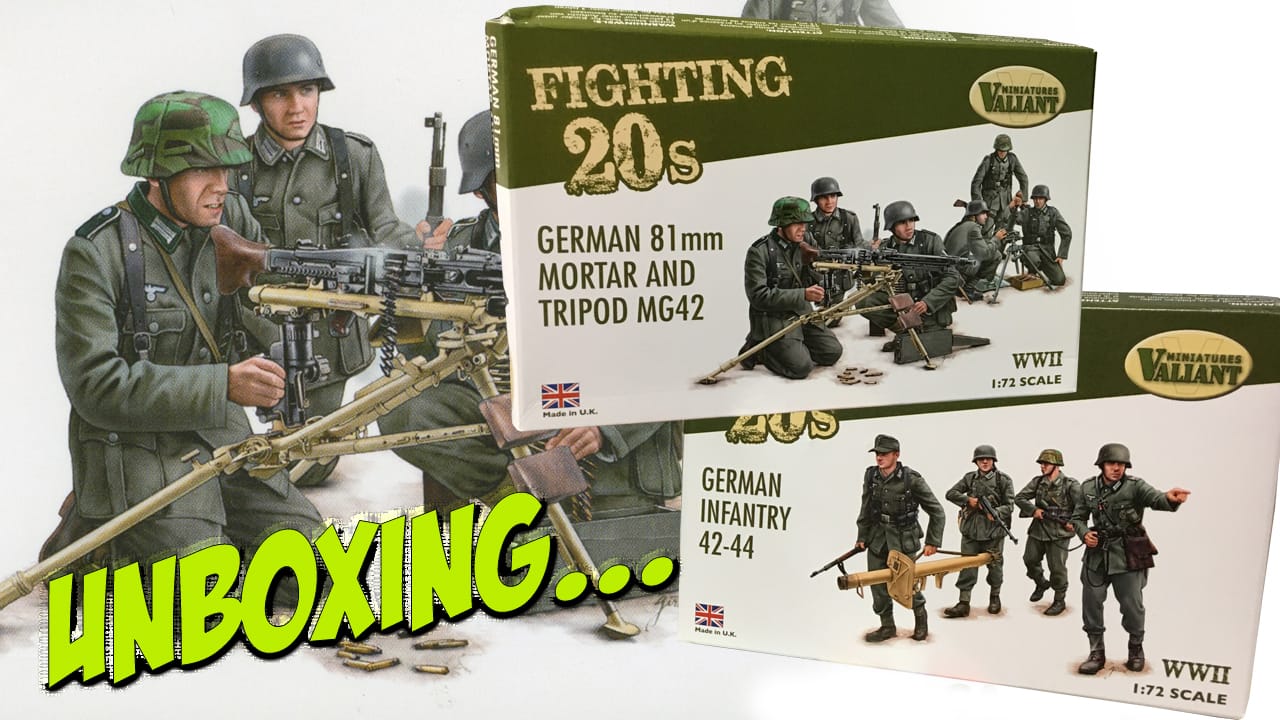 These are re-designed miniatures, with a box of 21 German Infantry 1942 – 44, plus a support weapons box of 13 figures, German 81mm Mortar and Tripod MG42, complete with two tripod based MG42s and two 91mm mortars.

In the Infantry box are three sprues in total, two of which are duplicates with nine figures on each, the third, smaller sprue, contains command figures and additional heads. On the duplicate sprues are five complete figures, four with moulded rifles and one with an MP40 sub machine gun.

The other 4 include an MG42 gunner with a belt of ammunition around his neck, two standing figures and one kneeling figure. The latter three figures have no arms and are designed to be used with the various optional separate weapon and equipment arms. The MG42 gunner has a separate weapon which may be fixed under his arm so he is walking along carrying it.

The optional weapons include an STG44 assault rifle, a Panzerschrek, an MP40, Panzerfaust and an ammunition box.

The command sprue has a figure in an officer’s cap, one figure holding a map and a radio operator. The figures may be converted using the optional heads on this sprue; field caps, side caps, covered helmets and a bare head.

The support weapons box has a similar take, with two duplicated sprues and a smaller one. There are five figures on each duplicated sprue, plus an MG42 and tripod, and a mortar and bipod, plus two bases for each of the weapons. The figures represent the crew for the two weapons, but also come with separate weapon arms so you can arm the crew with infantry weapons.

The smaller single sprue is the same as the other command one, complete with the optional heads.

These are two interesting re-vamps of previously released figures, and have a number of potential options which allow for some useful customization. The plastic itself is of a similar type to other ‘hard plastic’ 28mm figures on the market, which makes them durable. They would work well with any World War Two rules and would aid in the rapid creation of a suitable force.